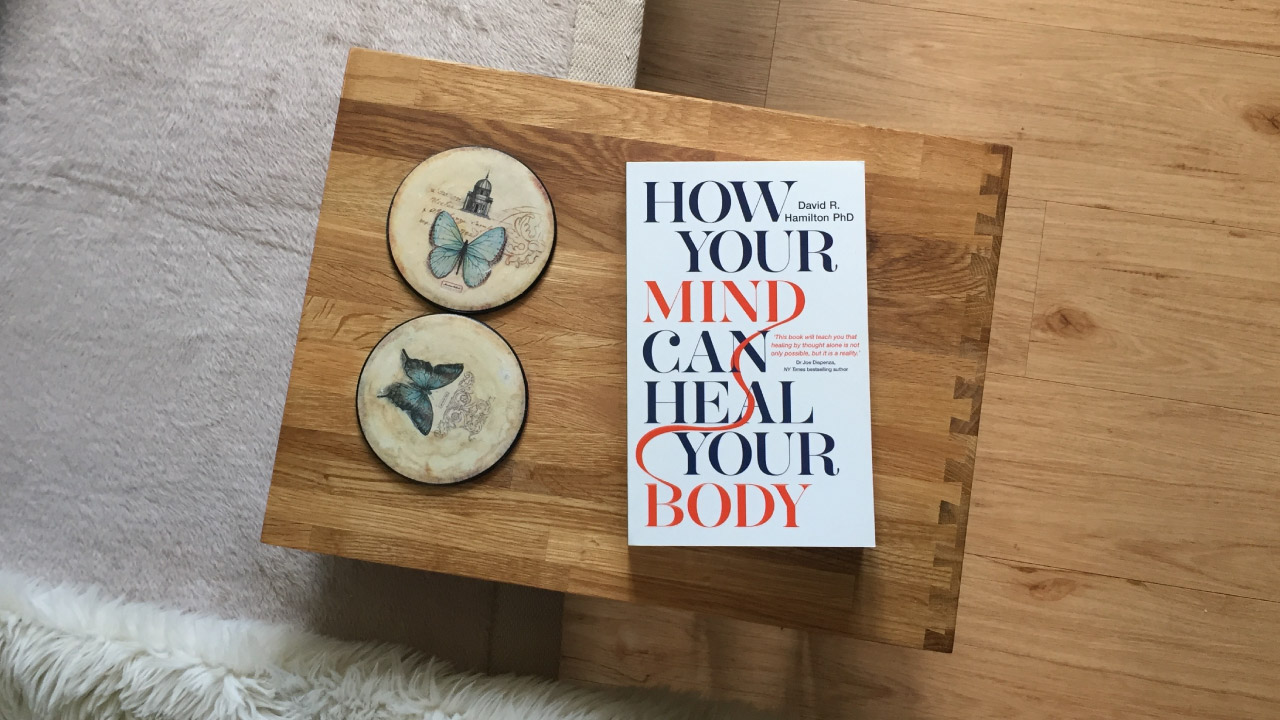 Power of the mind: How I cured myself of the psoriasis I had for 20 years

Below is the post I wrote on March 28, 2014, as it appeared in the second edition of Dr David Hamilton’s book, How Your Mind Can Heal Your Body (page 168). David very kindly sent me a signed copy of the book 🙂

A list of handy resources can be found at the bottom of this page.

When I was 17, I developed these persistent itches on the back of my scalp. As I had grown up with skin issues since I was a child (food allergy rashes), it didn’t worry me at first, since scratching it was quite satisfying in some way. In fact, it was probably subconscious for a while. But after a few months, I could feel that the skin had thickened and the little ‘patch’ that had formed was expanding. I figured that something was not quite right, so I went to the doctors to have it checked out.

The doctor looked at it, and then started checking my elbows and knees, which puzzled me. He concluded that it was psoriasis – even though it couldn’t be found anywhere else on my body. Psoriasis is a condition in which skin cells divide 7 to 10 times faster than they are supposed to, making the skin thicker, red, scaly and itchy. Thankfully, it was contained to my scalp alone – it is usually more common on areas such as the elbows and knees. That explained that at least! I was also told it is a genetic condition which is (supposedly) incurable. ‘Well, there you have it, then’, I thought.

In the years that followed, the patch kept expanding, which concerned me not so much because of the itching and discomfort, but mostly because I didn’t want it to come out from under the hairline – I was very self-conscious about it and didn’t want people to notice. It’s interesting to think back and realise that what other people thought was more important than my own discomfort… Eventually, it ended up covering the back half of my scalp, but it stayed under the hair line. After that, I guess I just got used to it being there. It itched, so I scratched. It flaked, so I got used to brushing skin flakes off my shoulders all the time, so people wouldn’t wonder if I had a severe case of dandruff and just needed to look after myself better. Most of the clothes I wore in those days were black, so that didn’t help matters much!

In the years after the diagnosis, I tried every treatment on the market – ointments, creams, shampoos… Some soothed the itching a bit, some reduced the thickness of the skin a little, but nothing really got rid of it – which is what I was hoping for on some level, in spite of the ‘incurable’ factor. The oily ointments made my hair so greasy, I ended up more embarrassed about that than the actual condition itself!

Some years later, as I was prescribed yet another ointment, I looked up the side effects. It was a cortico-steroid cream, which could allegedly cause some hideous side effects, including making it worse!

I was fed up. I’d had enough. I figured, I’d rather just have psoriasis! So that’s when I decided to give up. No more creams. No more greasy ointments. No more expensive shampoos. Just get on with it, and live with it. It just seemed like a lot less hassle.

Now, I had always had an interest in alternative healing methods, and as time went along I learned more and more about holistic approaches to health, and about the mind-body connection. This really resonated with me on a deep level. And then something dawned on me. A thought, almost a knowing, that one day, I would get rid of psoriasis. Just like that. Just as it had come – back to nothing. I didn’t quite understand where it came from, since I had no idea how to pull it off, but it was a strong sensation nonetheless.

Gathering pieces of the puzzle…

As I set this intention (I suppose that’s what it was), I also knew that at that time, I wasn’t ready. And I accepted that, although at times it was frustrating (I’m not known for my patience!). But I knew I was learning, growing, gathering more information, to one day make this intention a reality. So I put it to the back of my mind and I read books on nutrition (which I am now qualified in), quantum physics, mind over matter and lots on personal development.

Then, 20 years after the initial diagnosis, I came across David R Hamilton PhD‘s book ‘How Your Mind Can Heal Your Body’. It was like I had found the missing piece of the puzzle. He talks about the placebo effect, which I find immensely interesting. And it was like this gave me a nudge, and I finally realised that I was ready. Ready to send psoriasis back to where it came from. Not in an angry way. Not in a resentful way. But in a peaceful, and knowing, way. No resistance. In the book, David shares stories from people and how they cured themselves of serious health conditions and diseases such as cancer. Thankfully, my condition wasn’t life threatening – although some forms of psoriasis can be very serious. But I realised I could use these same methods, these tools, to accomplish what I set out to do.

Some years before, I had already heard a story of a child with a terminal brain tumour (perhaps I’m making up some of the details here, but it gets the point across). Instead of having to undergo invasive (and futile) treatments, the child was asked what he enjoyed doing. He said he liked to play Space Invaders on his computer, so that’s what he got to do. As he was playing and shooting the aliens, he was told to imagine he was shooting at the tumour in his head, which would crumble down bit by bit, just like aliens in the computer game. Some months later, the boy announced that the tumour had gone and he wasn’t ill anymore. Lo and behold, this was confirmed by doctors after they ran their tests.

I loved this story. I thought it was wonderful both in how the child cured himself as much as that his parents or carers took the alternative route. The visualisations described in David’s book were of a similar nature, although each person had a different way of approaching it – some used forceful methods (such as shooting at the tumours, chipping away pieces of it), whereas others used more gentle ones (such as embracing the tumour cells, thanking them for the point they were making and asking them nicely to leave).

My own visualisation – beyond silly…

So I made up my own version. Wait for it… I decided to visualise myself small, standing on my own shoulder, and talking to the skin cells on my scalp. I told them that I appreciated them, that they had worked really hard, but it was now time for a vacation, to stop working so hard. At the time, to say it felt silly was an understatement. It felt downright ridiculous in fact. But I just laughed at myself, and stuck with it.

One day I was visiting my Reiki Master, and I told her about the visualisations I was doing. She then gave me another piece of the puzzle. As I had gotten so used to having psoriasis, all the habits surrounding it (such as brushing the flakes off my shoulders) had become almost subconscious. So she basically told me to take the ‘reverse’ approach – she said that by brushing my shoulders, I was giving my scalp an excuse to flake! That made me realise that the visualisations were only one (important) part of it. The other part of the equation was to get myself in a conscious attitude of ‘I used to have psoriasis’ rather than the habituated subconscious attitude of ‘I have psoriasis’. So, I had to stop brushing my shoulders. I had to stop being conscious of skin flakes. I had to feel, do and be as if I didn’t have psoriasis any more.

I think this was what took the biggest effort. Breaking a habit of 20 years wasn’t easy, but as it turned out, not impossible either. Every time I caught myself brushing my shoulders, I forced myself to stop. Every time I noticed those skin flakes on my clothes, I just left them there. It was difficult and frustrating – it felt almost alien, somehow – but I persisted and gradually broke the habit. That, in combination with a loving approach to self-healing, enabled me to say after about 12-18 months of visualising, that ‘I used to have psoriasis’ – and it was actually true.

I’ve been psoriasis-free for about… 3 (?) years now – I’m not actually sure how long, since I don’t give it much thought these days. In addition to visualising, I also started using clay (Rhassoul Clay from Morocco) during that time to wash my hair. My hairdresser said it has made my hair thicker and healthier, and not having to fight its way through that thick skin is definitely helping! I still use the clay now – it’s ideal for problem or sensitive skin, and I love it as a body wash too.

I feel that this experience has given me a glimmer of insight into the power of the mind… We don’t know half about its true potential, but I hope it will become an important part of modern medicine sooner rather than later, so that potentially harmful treatments are a plan B rather than a first choice. Here’s hoping!